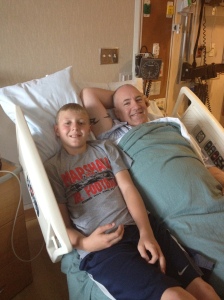 So the results were all in.  The pathology report from the colon resection, and the results of the CT scan of the chest, abdomen, and pelvis.

The key finding in the pathology report was that one of seventeen lymph nodes tested positive for cancer.  That meant the cancer had spread into the lymph nodes and, therefore, I would likely need chemo as part of my treatment.

The other results showed that the lung nodule had grown from approximately 12 mm to 18 mm in 200 days.  This came along with the recommendation that the nodule be biopsied as soon as possible. It was likely that the nodule was cancer but we were still not sure if it was a metastasis of the testicular cancer or colon cancer or possibly a third primary cancer (e.g. lung cancer).

Before agreeing to a biopsy, given the previous discussion about the challenge with the location of the nodule, we requested a consultation with a thoracic surgeon.  The oncologist referred us to the surgeon that we were previously considering for doing the biopsy, before the PET scan reported that the nodule was not likely cancer.  He suggested that this surgeon could put in a port (for chemo) and address the lung nodule.

When we met with the surgeon she decided that the nodule was likely cancer and we all decided that it would be best to simply remove the nodule and save time.  So the lung resection surgery was scheduled for 6/1 (three weeks after the colon resection was completed).

6/1 came quickly and the surgery was performed successfully.

The nodule was removed and the pre-pathology report found it to be a metastasis of the colon cancer. The good news was that the section of lung removed showed clear margins (e.g. the cancer was removed entirely).

So, now with the metastasis to the lung and a lymph node the diagnosis is Stage IV Colon Cancer.

In the following days the final pathology report confirmed the preliminary report.

The recovery from the lung surgery took a couple of weeks (a bit faster recovery than from the colon surgery).

And with the recovery moving along quickly we started to discuss next steps with the local oncologist.  We also started looking into getting a second (and possibly third) opinion.